Here’s How To HASHTAG Your ELEVATOR PITCH

Summary: What should you say to differentiate yourself from other agents and investors? How can you quickly deliver an elevator pitch online? How can you find a missing heir in probate when the other relatives haven’t had contact with them in years? What should you know when considering your business structure and liability for investment? What opportunities are there in co-hosting a seminar with other vendors in your market? Chad and the Masterminds share their advice and insights.

Audio stream: Differentiating Yourself From The Competition: How To HASHTAG Your ELEVATOR PITCH (buzzsprout.com)

00:00 Introductions
00:21 How to Find a Missing Heir in Probate
08:41 Business Structuring and Liability for Investment Activity
16:21 Pre-Probate: Skip-Tracing and Marketing
23:14 How to Generate Leads Through Seminars
29:21 How To Hashtag your Elevator Pitch
41:03 Getting Prospects To Care About Their Financial Future: The Stepped-Up Basis and Proposed Tax Changes
49:42 Sparking Participation in Zoom Seminars
52:34 The Social Enterprise Approach to Probate Marketing
1:07:16 Turning a Million Dollar Single Family into a Multi-Million, Multi-Use Building

Welcome everybody to the probate mastery, weekly group coaching call Rosie. You’re back. Good to see you here, bill gross. Thanks for being here, sir. How can we serve you guys today? Does anybody have anything you’re want to work on? Have questions about any topic, any transaction engineering
who’s got appointments this week. I have a question on the missing heir okay.

How to Find a Missing Heir in Probate

How to Generate Leads Through Seminars

How To Hashtag your Elevator Pitch

Getting Prospects To Care About Their Financial Future: The Stepped-Up Basis and Proposed Tax Changes

[00:48:52]But if you can get the sponsor of the call, like the host of the call if you can get them to agree Hey, that sounded like something fun to do.
Hey guys, listen this week Rosie, not just the realtor Hayer had a couple of really interesting questions that she asked if she could ask in front of the group. And I really think we’re all gonna learn something here. So Rosie goes ahead and drop the link and then you drop a link in the chat and then he’ll actually display it.
So you can collaborate with him. But like the questions, I would be looking for is, how many of you work with realtors versus source your own deals off-market? And then you want to, you’ll see a percentage. You’ll see 75% work with realtors, 25% don’t, and then ask another question is what’s the number one?
The thing that realtors do for you today and then put up like a multiple choice. It could be, it might come at you in a word cloud, or you could do like a multiple-choice with six options, more than just two or three. But it’s going to show you in real-time, 70 people, their opinions and what they’re currently doing, and then start getting into the things like what is the biggest problem you have when trying to find an investment-friendly realtor and put those things out there.
And so anyway, you could do it where it’s an interactive survey almost. And I wish I could find, I wish I could remember the name of that software. Yeah. Yeah. It’s something against Regis saying I’m an investor and I’m a realtor and not just a realtor, but I have a real estate license. I’m looking for partners.
Yeah, no that’s good. But I’m looking for things for creative ideas for her. Absolutely. That’s what she’s saying. I’m looking for ways for her to stand out on a zoom call. But anyway, if the organizer is willing to let you do that, you can do a survey that everybody could learn from.
Even the guys who like who isn’t going to work with you, they’re going to be like, I’ll be damn, I guess I’m not the only one. And you like they can see that other people are having trouble. But yeah, and Martha said, anything you can do to really drive that home. Listen, I’m a realtor and I can help you there, but I’m predominantly here because I want to provide, I, I wanna, I want to do deals like that’s a job and being an investor as a career, the one at the breakfast school thing I had done is that because I was noting probably from here, I took this.
Title and I advertised in the investor group because these people are coming across deals. We don’t want to buy work with an investor. They want to sell on the market. And a lot of really good referrals started coming from the investor group for that reason. So they do see me as a probate specialist.
Yeah. So that was a good vehicle for listings. But I think I got enough content to work on. I’m going to show up as an artist, realtor. I think it’s a really good time to be with them. The survey, because if you get to add 1031 exchange of the CPA conversation, I think between these three, I can stir up enough audience to get something out and I’ll bring back to the team.

Turning a Million Dollar Single Family into a Multi-Million, Multi Use Building 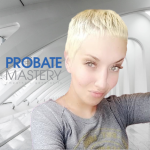 Katt is an expert in probate marketing and helps entrepreneurs build businesses in the probate space. She is the co-founder of the Estate Professionals Mastermind podcast, which has become the most widely-shared probate real estate podcast. She also writes training content for ProbateMastery.com and a weekly LinkedIn newsletter followed by over 5000 professionals. You can reach her on Instagram, Twitter, and LinkedIn.